We Spanked the Monkee! 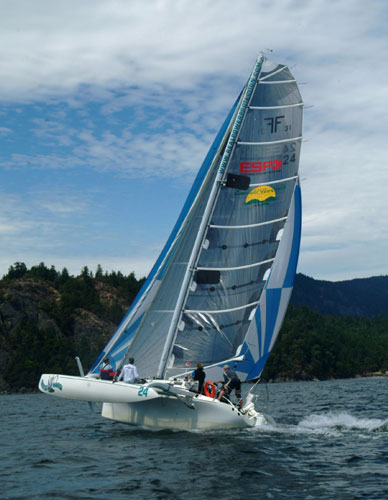 As everyone should know by now the Cheekee Monkee capsized in the 2007 Fort Lauderdale to Key West Race. Hopefully, this summary will provide some facts about the boat, the owners, the conditions and what went wrong.

Cheekee Monkee, a highly modified 1995 Corsair F-31 was purchased by Bob Kirsten and I (Ron White) about 1 year ago from original owner, Kim Alfreds. Bob and I have been sailing and racing multihulls for a combined 26 years and Bob was the builder of his prior F-25C, Accipiter. Kim Alfreds was the brain child and financier of all of the original mods to Cheekee Monkee including:

After purchasing the boat Bob and I spent several months making changes of our own, including a complete electrical re-fit, converting to a tacktic wireless instrument system, all LED lighting, new plotters and XM weather system, removal of built in fuel tank, numerous cosmetic repairs and changes, removal of propane heater, new lighter motor, major structural upgrades, and on and on and on.

Also thanks to a lunching mishap due to yours truly, we built a new carbon mast that is about 40 lbs lighter than the original Forespar mast. The mast construction was completed with Ed Wheatly’s Wahoo Composites in Dexter Michigan supplying the shop and the technology and knowledge, and Bob and I supplying about 85% of the labor. The new rig came out beautiful and includes many concepts not previously used in North America. The mast was designed and engineered by Stuart Bloomfield. In total since all of the changes we have made the boat now weighs in at about 3600 lbs with main, boom, battery and motor. Our first opportunity to sail the boat with the new rig was in the couple of days prior to the race and virtually all of our time was spent rig tuning. Suffice it to say that we have had precious little time sailing the boat since purchasing it.

We decided to invite Kim and one of his regular crew members, Mike McGarry to join us for the race, hoping to go to school and learn from the masters. They enthusiastically accepted our invitation.

I have read a great deal of speculation/observation of conditions at the start of the race. Prior to the start we observed 18 to 25 knot winds (we have a masthead wind speed indicator) and 4 to 5 foot seas. The starting area was a little over 1 nm offshore. Bob and I intended to do most of the driving during the race, in order to take advantage of the expert advice available to us, but elected to have Kim drive at the start to best deal with the congested starting area. We crossed the line within about 8 to 10 seconds of the gun,
fully powered up with spinnaker, small jib and main, about 1700 sq ft of total sail area. McGarry was on the spin sheet and Bob and I were in the stern of the main hull sharing main sail duties, all sheets were in hand. After our late start we immediately passed several other multihulls, the last of which I recall was the C-36. Between two and three miles down the course I had observed speeds of 20 to 23 knots, and we were flying the
center hull regularly, also having to aggressively play the main to control rudder ventilation. I was starting to think, although I didn’t say it, that I couldn’t take 8 to 10 hours of this. Shortly after having that thought, we started to round up, rudder ventilating, and were unable to release the main. The boat rolled on it’s side and immediately turned
turtle.

I hung on to one of the cockpit rails and was gently dropped into the water, the trapped air in my drysuit lifting me like a cork, and I was on the nets in about 10 to 15 seconds. Bob’s inflatable deployed and he was also quickly on the nets. Mike scrambled up the raising ama and climbed over the top, landing on the bottom of the net, only getting his feet wet. When the boat was at about 90 degrees, Kim launched himself clear from the high side and was also quickly on board. Everyone on board was wearing a 33+ lb
buoyancy inflatable vest. Mine auto inflated about 10 minutes before the capsize, and was deflated before we went over, Bob’s inflated in the water and Mike and Kim’s were manual and were not needed. We snagged a floating bag of apples and some bottles of
water that had escaped the main cabin, opened the crash compartment and retrieved a handheld VHF and GPS and radioed the CG with our position and requested that they summon a commercial tow boat.

When we went over I would estimate that we were in about 60 feet of water. Very soon, after being blown closer to shore, the mast started hitting the bottom, and we had to cut the PBO headstay and pull the capshroud pins, so the mast would float free. The boom is deck stepped and the mainsheet was still attached . We discussed and dismissed the
notion of someone swimming below to cut the clew free, fearing entanglement with the rigging in the surging conditions. The committee boat came along side and threw us a line to hold us offshore until assistance arrived. Several commercial towers showed up
about 45 minutes after the capsize, circling like sharks on the hunt, its quite an interesting perspective watching them compete for the business. We chose one of them and I then had to get on the tow boat to verify insurance and sign a contract before they would begin operations. They were very professional and asked our advice every step of the way.

After several failed attempts the final righting was accomplished by attaching two bridals, one to the forward beams and the other to the rear beams. The boat was towed astern first by the rear bridal to get it moving to windward and against the waves. As the stern started to dig in the load was transferred to the forward bridal which pulled the bow up and the boat came bow over stern and was righted. The boat used to do this was a large
tow boat with inboard diesels. There were two other inflatables with 200 HP twin outboards to render assistance. There would have been no way to right the boat without the powerful inboard that was on site. We followed behind and collected debris, recovering nearly all of our gear. Each person had a short list of lost items.

We were taken to shore and dropped off at Lauderdale Yacht Club at about 6:00 pm, where our vehicle was parked and we immediately headed to the 15th street launch ramp where the boat was being towed. We were greeted by several news crews with cameras rolling. I believe one writer suggested that we were mugging for the cameras, but actually they were there regardless, and we could either be interviewed and demonstrate the same good humor that we never lost or be pissed off grumps, something that’s just not in any of our nature.

The boat arrived at about 7:00pm (capsize was at about 1:45 pm). The mast was hanging half off of the stern with all sails still attached and dragging. Several sails that had been stored inside the boat were also dragging astern including an additional spinnaker and a code zero. All but the code zero were destroyed. The bow sprit was broken, boom ripped from the deck leaving a substantial hole, numerous other abrasions to the hull,
destroyed pulpit and pushpit etc, etc. The new mast survived, not unscathed but appears to be repairable. Several sections of the mainsail track were damaged, two spreader bases broken free and lots of cosmetic abrasions. Rod rigging will likely be replaced. The process of cleaning up the mess, loading the boat and getting it on the trailer took about 4 to 5 hours. Cheekee Monkee will be back in Michigan soon and we will begin the
process of repairs and putting it back together.

Conclusions:
After months of working on the boat and missing the Great Lakes season, Bob and I were simply not ready to race in these types of conditions, lacking familiarity with our high performance boat and its characteristics, due to virtually no time on the water. While we both have extensive experience in much more difficult conditions than we saw, we weren’t able to anticipate and react quickly enough to balance Kim’s aggressive driving and Cheekee Monkee’s unique characteristics. Conversely, Kim was focused on driving
in a manor that he has been able to do with his regular crew with much success. As the four of us discussed the event after the fact, we all agreed that we had mismanaged the situation, Kim in failing to recognize our limits, and Bob and I didn’t act like owners and put the brakes on when we first felt uncomfortable, which was about a mile before we capsized. We simply assumed Kim was in control. Bob and I both agreed that neither of
us had ever allowed another individual to drive our own boats beyond our own comfort levels before.

I want to emphasize that this is not finger pointing and assessing blame. Kim, Mike, Bob and I have become friends and I assume we will be for a very long time. I love Kim’s positive upbeat attitude and Mike is a sheer pleasure to sail with. I hope we all have an opportunity to race together again in the future. We all maintained our sense of humor throughout and made the best of a bad day of sailing. We earned entry into a club that
none of us intended to join. We simply lacked the time necessary to function as a unit.

If the boat has a flaw, it is mostly that it needs a deeper rudder to compensate for the lifting of the center hull. I don’t believe today that I would ever be comfortable driving the way Kim does, with the main trimmer having to constantly dump to compensate for rudder ventilation. We will consult with the experts, but I believe Cheekee Monkee is in
for a new rudder, one to two feet longer. The current rudder is already deeper than a stock rudder or a 31 1D rudder. We may never achieve Kim’s level of performance with the boat, but that’s ok. We will improve and we will challenge ourselves as we always have, but we will also keep it “sunny side up” and within our comfort zone, which may require us to us to use a little lower octane. We’ll have lots of practice before the first
race of our season.

I have been very outspoken on safety issues and managing the multihull capsize problem, and my views on the issue haven’t changed now that I’m a member of the fraternity. I am relieved that we didn’t stuff up anyone else’s race that would be required to render assistance, which likely would have been the case had we been further down the course.

The safety systems worked fabulously well. All wore offshore PFD’s, two of us were wearing drysuits, and we had ample safety gear and food stores in the crash box. Some added things that we will do in the future is add closures to the built in cooler and nav table and net closures to other open storage areas. All personal gear will be carried in dry-bags and tied down.

Heartfelt thanks to all of the friends who called and sent e-mails. What I love about this sport is the way that it personally challenges me, the personal fulfillment it brings to push myself toward goals that are not easily achieved nor guaranteed, and most importantly the friendships that I have made in the process of living a dream.