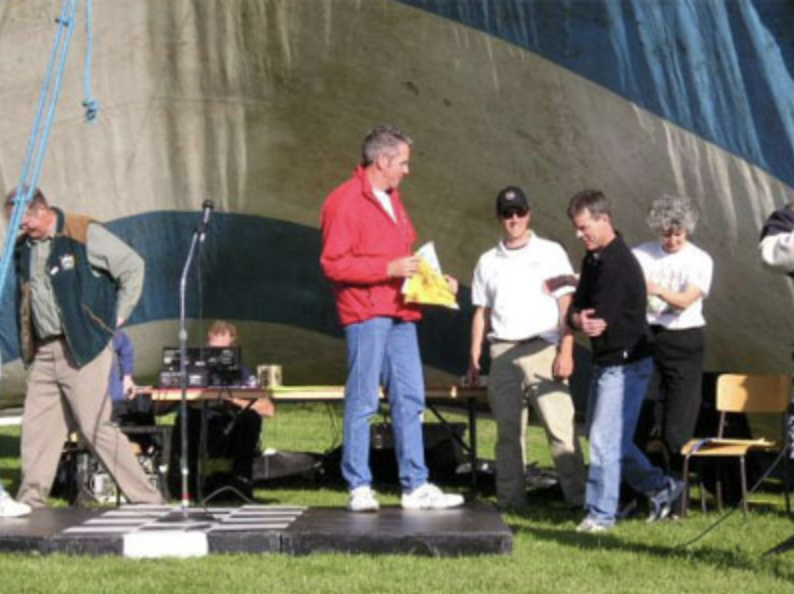 Joe and Colin both read the racing instructions before retiring for bed that night and found that the information was conflicting. One paper listed the start at 9 am and another as at 8 am they both agreed to assume that the start was at 8. Kim and Jason were late getting up next morning, so Joe and Colin prepared the boat early and then Colin set off for breakfast meeting up with one of the owners of Flip Flop and fly. Time was running short when Kim finally wandered in and sat down for breakfast at about 7.20 he told us how some shady characters had taped to the alma and above the name of the Cheekee Monkee the words “spank the” before he could complete the story Jason came running in announcing that the race started at 8 prompting Kim to jump to his feet announcing that he understood the start was at 9 and that he was not packed. Off he ran to the cabin to pack and on the way down the dock took a nasty fall skinning his shin rather badly.

We still managed to arrive at the start line with time to check out the wind, the angle of the start line and how the other boats were positioning for the start. You might think that a good start doesn’t matter in such a long race but as we noted in another leg seconds can make the difference between winning and loosing. Kim chose to start on the left side of the line mixing it up with the fleet. Redshift was to the right with Bad Kitty in the middle of the fleet.

We unfurled the screecher and we had a good start on Port Tack. Bad Kitty chose to remain close to the left hand shore and we headed across to right side where we felt there were signs of stronger winds. We were tacking our way up the right side trying to reel in the 50’s. Flip Flop and Fly decided to shadow the Monkee today, it was a dual. We would tack 3F would tack we would tack back, 3F would tack with us. They seemed to get some great lifts up the shore when ours were missed; they were definitely on a Monkee hunt for the entire race.

We navigated through the channel markers and headed for the more open water. Kim was constantly comparing our boat speed seeking the most favorable currents, Joe was getting a cramp in his neck from checking for 3F and Jason was looking for the infamous Redshift.

We mainly stayed to the left side of the channel staying with the favorable current with long tacks. We traded tacks with mono hull White Cloud many times. In the distance we could see Redshift going far out to the right trying to scout for favorable winds to make up for lost ground. We were concerned that Wayne would catch a different wind from us and scoop us at the finish.

We were well ahead of our competition when passed through the inside of the rocks at the south side of the entry to Pt. Hardy with White Cloud on our tail. Dragonfly chose to go outside the rocks (island) to keep in the stronger wind and maintain their speed. We turned the corner and popped the chute jibed a couple of times then aimed at the finish line.

It was a beautiful calm finish with our spinnaker flying and we could see the race committee truck on the government pier. We crossed the finish line and looked back to see if any competitors other than Dragonfly had arrived yet, they hadn’t in our division. We bagged the spinnaker and motored to the gas dock to refill prior to our morning departure. While we were at the gas doc we could see 3F with Redshift hot on their tail. 3F was fighting off Redshift with all their might, 3F crossed the line first. We knew that the times were close. We were not sure what position we were going to finish in.

While on the dock we saw 7 mono hulls all arriving at the finish at the same time. Three of them were only feet from our dock with their spinnakers flying. The inside mono hull was over taken as the middle boat stole their air and collapsed their spinnaker shooting ahead of both boats. What a finish!

We cleaned up the boat and later that night we went to the awards ceremony, we finished 1st in our division!

After the awards there was a cool Native Dance ceremony which we found out was to celebrate Aboriginal Day & the arrival of the Vanisle 360 fleet.

We had dinner on Joe as he was leaving the next morning for Vancouver. Bad Kitty attended and we very much enjoyed the Sportsman, the camaraderie and it was sad to see Joe leave.

Our support crew (Rhonda & Tom) picked up Kim’s son Shane from the airport and attended dinner with us.

Tomorrow is a new day, going over the top of the island. We look forward to strong winds and a safe sail to Winter Harbor.