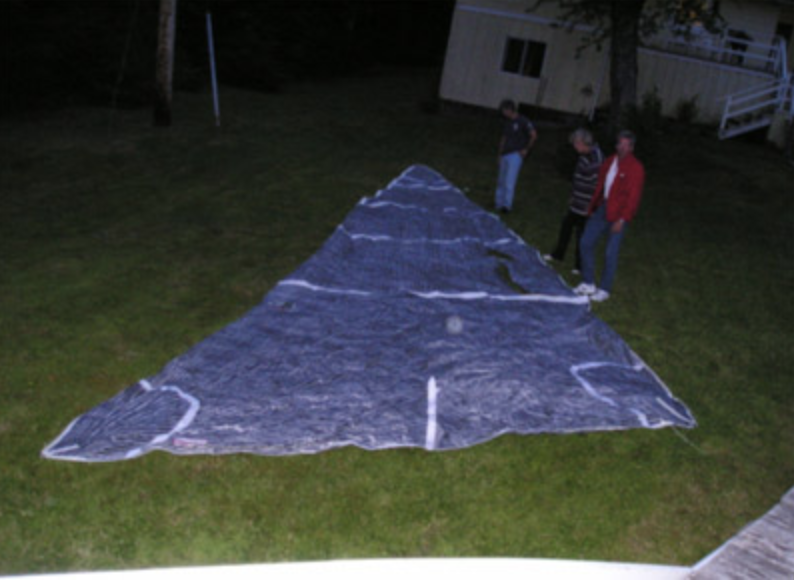 Well it’s a darn good thing I have a spare (back at the truck). That won’t help me with the rest of today’s race. As I mentioned, we had already blown the lead tactically by choosing the west shore and now we had a huge hole in the jib and we were dead in the water. Colin got the Jib down and the wind (did I mention that it was now blowing about 20 knots?) decided to blow the sail back up the forestay and over the side. Jason and Colin struggled for several minutes to contain the Cuben Fibre monster as it thrashed about the deck and under the water. Finally, exhausted and very frustrated, they manage to get the sail off and down below. Back up on deck comes the small jib, but now we have a new problem, the jib halyard has blown out behind the mainsail and managed to snag itself on the end of a batten half way up the leech. Finally after wrestling with the halyard, we contain the situation and get the small jib up. More than 15 minutes elapsed while all this was going on. For boats capable of sailing upwind at speeds in excess of 10 knots, it looked like the Cheekee Monkee was going to have a rather poor showing on this leg.

The wind is still building so we take in a reef to the main and with grim determination, we head for the east shore of the channel to start chasing down the leaders, (well actually most of the fleet). The interesting thing that we noticed was that the leaders that did so will on the east shore were now sailing up the west shore and that didn’t seem to make any sense. We went with the east shore, if it helped in the early stages, why wouldn’t it still be the place to be?

We found a narrow consistent 2 knot current channel on the east shore, so we stayed there. We started making good gains on the fleet. The wind eased up some and we shook out the reef. The wind eased again later and we raised the screecher. At this point we were pushing it for the screecher in terms of wind speed, but the crew all wanted to go fast and on the Cheekee Monkee, that is how it’s done. Tacking the screecher up the east shore was and incredible amount of work for the crew. It was challenging from the wind strength point of view, we blew about 10% of our tacks and would get stuck in irons wasting precious time trying to recover. Fortunately for us, after lunch (of which we had none, as we were too busy), the wind eased some more. We had now sailed past most of the fleet; we were closing in on the multi hulls and the leading mono hulls.

As the wind lightened, our competitors all rolled out their screechers; the conditions were starting to favor the Cheekee Monkee. We kept going up east shore until, lo and behold, there in the distance was Dragonfly, sitting in the no wind zone. They must have been there for a couple of hours. We kept passing boats and getting closer to the no wind zone. Now we had to tread together patches of wind. Closer and closer we got to Mystic, the lead div 1 boat and Dragonfly, the race leader. Tacking back and forth, back and forth, back and forth. We finally pass Mystic, a few minutes later we pass Dragonfly. What a comeback! From almost last place to first place!!! You know what they say…..It ain’t over till it’s over!
The race committee broadcasts over the VHF radio, “For all those sports fans out there, Cheekee Monkee has just taken the lead from Dragonfly!”

We are leading Dragonfly and Mystic to the finish line, just ghosting in at 1.5 knots, it is a grueling 30 minutes, we are just 5 boat lengths from the line and Dragonfly comes rolling past us at 4 knots and wins the race by 35 seconds. So close, so far…….We cross the line second with Mystic nipping at our heels. We start the stop watch. We have to beat Redshift by 10 minutes and 8 seconds, Redshift comes barreling in on a filling breeze and crosses the line 10 minutes and 27 seconds behind us. Next comes Flip Flop and Fly, we need to be 12 minutes and 9 seconds ahead of them and they cross at 12 minutes and 18 seconds, wow, what a finish, less than 30 seconds separating the first three finishers in division 3. Cheekee Monkee is very lucky to take first place once again.

The crew worked hard, they were focussed on the objective all they way from start to finish. We tore up the jib and poked a couple of holes in the screecher, hey, that’s sail boat racing; it really is the agony and the ecstasy.