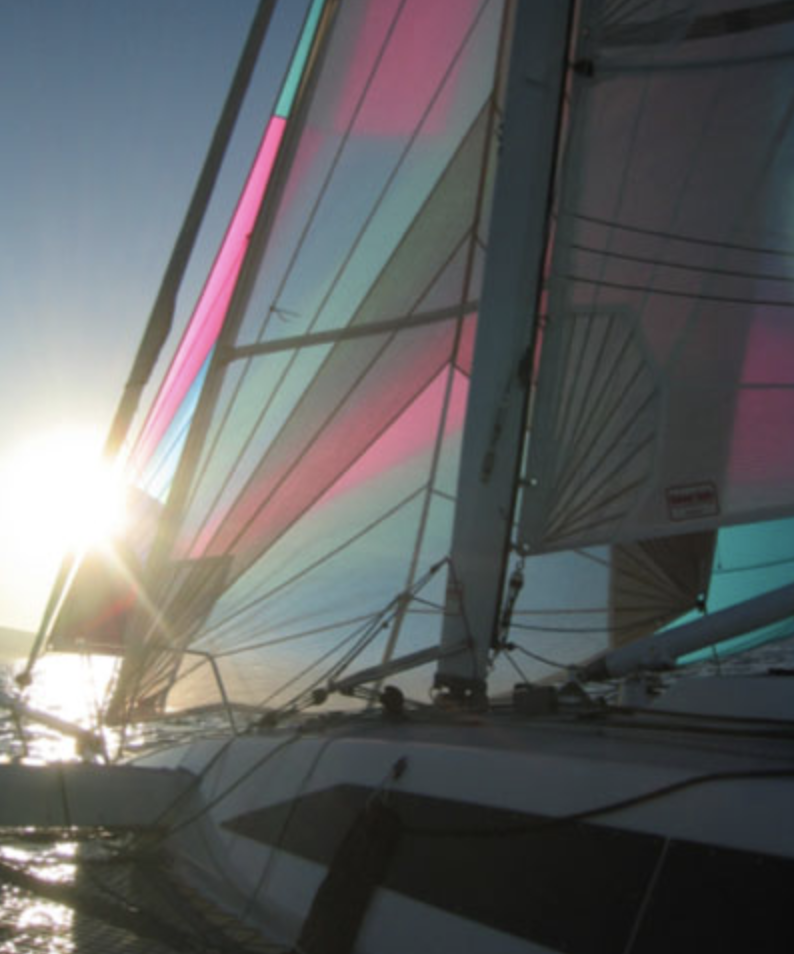 As usual, this didn’t last long. Bad Kitty was helping out as much as they could. The drama was unfolding behind us as Dragonfly was trying to break through to leeward of Bad Kitty as they approached D’Arcy Island from the south. Dueling back and forth for 10 – 15 minutes until after sailing well clear off Kelp Reefs, Dragonfly gybed away and broke free from Bad Kitty’s claws. Wow, that was intense sailing. Dragonfly now had their sights on us and by the time we were up to Halibut Island, they had taken the lead. We ducked between Halibut and Mandarte in a strong line of wind and started charging at 13 knots. It looked like we would regain the lead. Well that hope was short lived as we discovered a 5 knot opposing current in Miners Channel with no way out until we could clear Mandarte Island. Initially we must have given Dragonfly a fit as we took off in the wind, but when they saw us slugging away, I am sure they had a good chuckle at our misfortune. By the time we cleared the Channel, Dragonfly was up past Gooch Island and sailing away quickly, clearly in the lead.

We chased them up Swanson Channel and feared losing them completely until they hit Captain Pass, where the wind shut off. We came up behind them as they slowly fought their way through the pass. At one point, their lead was reduced to 100 yards or less. We tried to break through on the left side but it was not to be. We were caught in an opposing current with the new wind just out of reach. Dragonfly escaped as the rest of the fleet started to close in on us. Mystic was first to arrive, she tried to punch through on the right and almost made it but alas, she too was in the dead zone and struggling like us to break through. Next to arrive was Bad Kitty, as they came in, we finally broke free, but imagine my dismay as the dead zone got very small for Bad Kitty and they worked their way through on the left side successfully. Now there were three of us in pursuit of the mighty Dragonfly.

Gybing back and forth down Trincomali Channel as the sun sets and darkness descends in very light winds. The three of us are just ghosting along trading places from time to time. Dragonfly is long gone. Our strategy dictated that if we couldn’t get to Dodd Narrows by 0300, then we needed to exit the islands through Porlier Pass in able to get out into the Straight of Georgia. We knew that the next time we could get through Dodd Narrows would be at 0930 in the morning. We hoped that Dragonfly was going to get stuck up their and that we would be able to sail through Porlier Pass before the tide changed. Bad Kitty got into the pass first basically just drifting through with a very weak ¾ knot current pushing them, we entered next slightly after midnight and worked very hard to get through, it took a little over an hour to break out on the other side. Mystic managed to get into the pass next and they also got through before the tide changed. We could see one more boat behind us, White Cloud, but she didn’t get through and kept working here way north to Dodd Narrows for the 0930 slack water.

The three of us very slowly work our way from Porlier Pass towards Thrasher Rock over the next few hours. The pink of the sunset must have finally vanished about 11pm on this warm, beautiful and cloudless night. We were treated to a display of the Northern Lights which danced across the northern skies until extinguished by the approaching dawn at about 3:30AM, what a short night. As dawn broke, we could se the predicted NWesterly off Flat Top Islands. It was now a race to the wind line. All three of us are lined up, Bad Kitty on the left closest to Gabriola Passage, Cheekee Monkee, just to the left of southern end of the reefs at Thrasher Rock and Mystic, just to the right of Thrasher Rock reefs. Out we go all on port tack or sometimes starboard tack (the wind was circling) racing at dead slow for the wind line.

Cheekee Monkee gets to the wind first and off we go leading our small band of sailors to Nanaimo. Bad Kitty is close, too close for comfort, we have to beat them by 9 minutes and 6 seconds to win the leg in our division. Just before we radio in at Entrance Island to give our 1 hour notice of finishing, wonder and worry, is Dragonfly already at the dock, did they get to Dodd Narrows before 0300 or are they parked their waiting for the tide to change???

We get to Entrance Island first, crack off the sheets and deploy the screecher so we are double slotting our headsails into the finish line. It is a tight line to clear Tinson and Malaspina Points but we make it and look like we have made up time on Bad Kitty. We head for Gallows Point charging hard at 10 – 12 knots when puffffftt, the wind shuts off just off Stuart Point. We slow down and fight and tack and gybe our way into Mckay Channel. We ghost over to the shore by the commercial docks. The wind changes again, up goes the spinnaker, we head for the finish line and cross at 0755 at the heady speed of 3 knots.

No Dragon in sight! We are first boat in!!!!!! Line honors, first in class as it takes Bad Kitty over an hour to get to the line behind us. Mystic beat them in by a few minutes. What a race! Now the clock is ticking………..

We try to unwind at the dock, our shore crew is there to meet us, the crowd cheered us in to the dock. When Bad Kitty got to the dock, we all headed out for breakfast to talk about the leg. When will Dragonfly finish? I can’t wait to find out, I am too tied from being up all night and head over to the hotel for a shower, shave and a nap. When I awake after my nap, there is a message from Jason on my cell phone. Dragonfly finished 3 ½ hours behind us, we had wrested the elapsed time victory from Dragonfly! Way to go team!!! A monumental effort by all members of the Cheekee Monkee team.