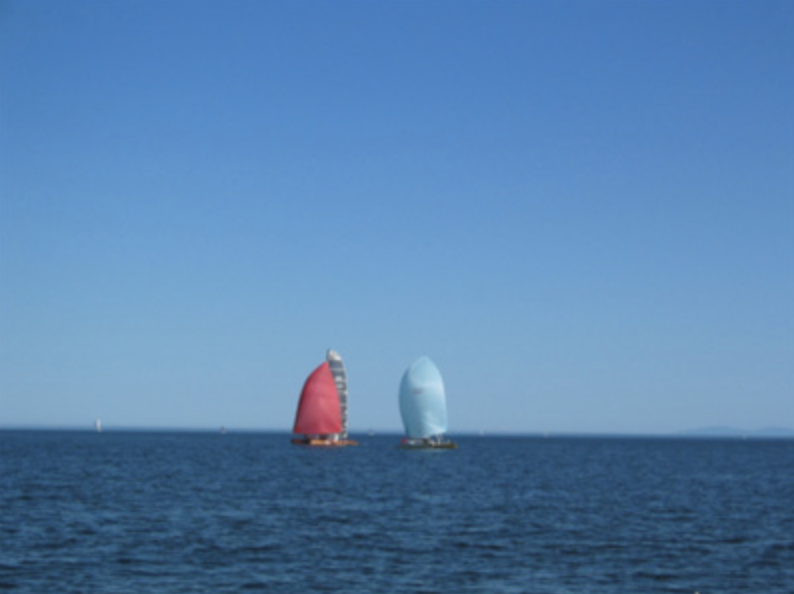 Thanks for a great event!

The crew of the Cheekee Monkee wants to express their sincere and heartfelt thanks to Rhonda and Tom who volunteered for arduous duty as the “Shore Crew” for the Cheekee Monkee. Not only did they work their butts off keeping the Cheekee Monkee provisioned and the crew accommodated in each port, they also serviced Time Bandit who was sharing space in our trailer. Tom is a diver and he brought his gear along for the trip. Extra thanks from me for that as it saved me from having to jump in to wipe down the bottom a couple of times during the course of the race.

We also want to thank our wives and families for their understanding and loving support for this 16 day event plus the countless hours and days of preparation and decompression for this race.

The race committee did a great job and a special thanks to Wayne and Janine for continuing to promote and organize a world class event.

Before the race even started, I booked the 3:15 ferry from Duke Point to Tawassen for the return trip for the truck and trailer. The awards were scheduled from 11AM to 3PM, well as luck would have it, the awards were delayed and it looked like we might have to miss the presentation as we had to leave the banquet at 2PM at the latest. Initially I made arrangements to have the crew taken back to Nanaimo and I would stay. Jason then took the imitative and contacted BC Ferries. He discovered that they had 44′ feet of over height space left on the 5:45 PM sailing. He booked the space and now the crew could stay for the presentation.

During the wait for the awards, Wayne Gorrie, skipper of Redshift brought his crew up on stage and gave a very moving recap of the capsize of Redshift off Race Rocks. His toughest moment came when he got back up on the upside down boat and realized one of his crew was missing. Wayne was about to start cutting through the netting between the hulls to look for Mike but took a moment to tap on the hull and Mike tapped back. What a sense of relief! Everyone was safe and accounted for.

Lunch was served, what a great feast! Hats off to the caterers.

The awards were presented right after lunch. Cheekee Monkee was awarded the coveted “White Flag” for the first to finish, fastest elapsed time for Leg 10, Paul pointed out that this was not a new record! That was set last time by Dragonfly.

The Cadillac Van Isle 360 is an emotionally consuming event; it will change your life. Not many people get to circumnavigate Vancouver Island. Many NW sailors view this as a local Holy Grail of NW sailing. Completing the Van Isle 360 imbues a real sense of personal accomplishment. Like any tough endurance event, the sense of camaraderie that develops throughout the fleet is soul satisfying. We become a family of sailing brothers and sisters in a fleet that is pulling for each other.

In 1999, the first year of the event, we were already committed to regattas in California and Nevada. In 2000, I competed while being treated for Bladder Cancer; needless to say, I wasn’t fully focused on the event as I wondered if this might even be my last major regatta. In 2001 still suffering from cancer, we registered for the event and I was on the East Coast racing when I learned that my cancer had progressed to the last stage and surgery was required, it was not optional, it was required. I had major surgery on April 30th of 2000 and had to withdraw from the 2001 Edition of the Cadillac Van Isle 360. The surgery was successful but I wasn’t able to start sailing again until Cow Bay in August 2001. Since then I have been focused on getting myself, the crew and the boat in shape for the 2003 Edition. Winning the Van Isle this year has been a personal redemption for me and my and my family as we have battled with these health issues over the past 3 years. For this year’s victory, I am truly grateful.

The Cadillac Van Isle 360 is hard work, it is fun, it is tiring, it is bloody and bruising, and it is dangerous, it is time consuming, it can be very expensive, it is all consuming, and it is the best race available. The format is conducive to team building. The course is very challenging, the scenery is the most beautiful in the world, the weather can be great or it can be miserable. You get a life time’s worth of sailing wrapped up into 10 kegs over 16 days. There is nothing else like it.

We saw whales, dolphins, seals, eagles, the northern lights, we spent the longest day of the year in Winter Harbour, and it was only dark for about 3 1/2 hours. Eco Tourist, Eco Challenge, and Eco Sailing the Cadillac Van Isle has it all!

When pushing hard down wind in big seas, we commonly stuff the bows as it is impossible to avoid all of the steep wave sets. The deceleration from 20+ knots to 5 – 6 knots in a short space of time will cause bodies to fly through the air. In our case, when Colin was below, he suffered serious injury, breaking 3 ribs, tearing a lung, bruising his kidney and twisting his knee painfully. When on deck in the back of the cockpit, both Shane and Colin fell onto the tiller several times, this damaged the tiller and interfered with sail trim and steering. In these conditions, it is vitally important that we remain unhurt and in position to effectively control the boat. We have installed a tether point in the main cabin to secure anyone below decks in this condition. In addition, we have implemented a training procedure for below deck safety for heavy weather sailing. In the cockpit, we have an arch at the transom, the crew in the cockpit now tethers around the arch and back to themselves, almost like a seat belt. This prevents them from falling forward in the cockpit and gives the mainsheet trimmer added purchase when trimming the mainsail in heavy weather.

Bail when you get a chance, water traveling at 20+ knots just seems to find its way in every possible opening, on the outside legs, in heavy weather; we had to bail water out of the boat several times.

Sail this race with a practiced crew that has been sailing together as a team on your boat and knows it intimately. In sailboat racing, it not so much that we get beaten by other competitors, but that we get beaten by the mistakes that we make during the race. At 5 minutes before the start, we are all even and equal in position. From that point forward, the accumulation of mistakes typically determines our finishing position. In our case, this year for the Van Isle 360 2003 edition, we were very fortunate to have made the least number of mistakes and suffered the fewest amount of gear failure.

Kim, Skipper of the Cheekee Monkee, the only boat to complete all 10 legs within the time limits for each leg. Below, the Canadian Coast Guard gives the Cheekee Monkee the water salute as she finishes at Campbell River.