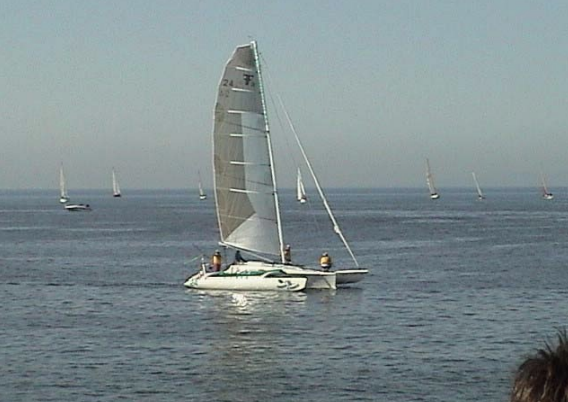 Cheekee Monkee takes 3 bullets at the 2002 TD Bank Semiahmoo Bay Regatta. Light winds, sunshine and two good days of racing were the rule for this regatta on April 27th & 28th.

We headed north on Friday from Sandy Point to Whiterock Pier. Clearing in to Canada was painless and handled over the phone, easier and friendlier than before 911. The same was true clearing back into the US on Sunday. My commendation to both the Canadian and US immigration people for Can pass and US Small Boat Reporting.

Saturday, it was a reaching (Screeching) start over to the west for the turning mark and then a long close hauled tack up to Alden bank and then a spinnaker run back to Birch Point and then into the bay and back to the finish line. The Cheekee Monkee flew around the course and finished in less than 3 hours. The next multihull came in an hour and a half later. There was a great performance by the Martin 243 Dalliance; they did this course in 4 hours and 12 minutes, which was faster than all the other multi-hulls. For our performance in this race, the Cheekee Monkee was awarded the TD Canada Trust Multi-hull trophy.

On Sunday, we were able to get two races in for the Tony Ruffer trophy. Light winds and a current made Sunday’s racing challenging. The Multi-hulls stared last and had to sail through the fleet parked in the no wind zone over by the mark at the entrance to Drayton Harbor. The Cheekee Monkee sailed around the fleet at 5-6 knots, rounded the marked and raced back to the leeward mark and then back to the finish line in less than 39 minutes. Flying Geese was hot on our heels in this race and we corrected out ahead of him by only 36 seconds for another bullet.

The next race had a little more wind but was set on a shorter course and we got around in 32 minutes and corrected ahead of the next place finisher by almost 4 minutes for another bullet. The Cheekee Monkee was awarded the Tony Ruffer Memorial Trophy and the overall trophy for the regatta’s two days of racing.

The party and awards session on Saturday night is a great lot of fun in the Ocean Beach Hotel, which is closed down for the Regatta participants only for the early evening. Sunday there was a BBQ at the port dock in Blaine.

Several BYC attended the regatta, Keladi, Jamoca and Flying Circus. Next year it would be nice to see more boats up at Whiterock to support this great early season event.

I would like to suggest another event to be sponsored by the IYC in October, but focus this event on the US side of the bay for the Saturday festivities over at the Inn at Semiahmoo. It would make for a good end of the season regatta to balance this great event from the beginning of the season.

Happy sailing,
Kim Alfreds and the crew of the Cheekee Monkee.